A book and a pair of royal blue knickers 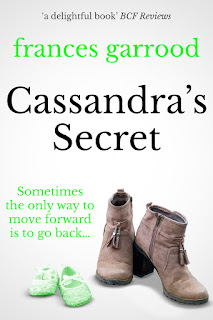 I know I've been banging on about my books, but needs must. I'm terrible at publicity, but just in case anyone reading this (a) is interested and (b) hasn't read this book, it's out in its new edition on Thursday (cue trumpet voluntary).

A bit about the book*. It started off with leaves falling off a tree - no more - and ended up being partly autobiographical (absolutely not intended). I never plan (not good). I'm a seat of the pants writer. Sometimes it works; sometimes not. But I think this is my best novel, and I also think this is because it's partly written from my own experience. The mad mother in the novel is based on my eccentric mum, the bereavement in the middle is based on my own bereavement, and it was my sons who showed me how to blow up cowpats (thanks, boys). As for the royal blue knickers (one reviewer said this couldn't possibly be credible), those were mine.

At school we had to wear navy knickers for PE, but my mother bought me royal blue ones. To this day, I don't know where she found them, but wear them I had to, and I was mortified. I dreamed of navy knickers; of looking like everyone else. And in the end she bought me some sort of navy briefs, which were even worse (PE knickers had to be bloomer rather than brief). But I forgave her, for as I wrote in the dedication, she took me out of school to pick primroses. Who wouldn't love a mother who did that?

So - please buy my book. It's currently still only 99p on Kindle. You can do this by clicking on the image in the side bar. After all, what else can you buy for 99p?

*Previously the Birds, the Bees and Other Secrets
Posted by Frances Garrood at 15:38