V is for Value

I'm always astonished at the value that is placed on certain things/people. Take Queen Victoria's knickers (well, you can't, actually. They're probably in a safe somewhere. But you know what I mean). In November 2011, a pair sold for $14,000. They are obviously of no intrinsic use or value; they're just some old, enormous knickers (my granny had lots - at least as big, and perhaps even bigger - and they weren't worth anything at all). But - these belonged to Queen Victoria, so they are valuable. (I would very much like to know how anyone can prove they actually belonged to Queen V. DNA? Photographic evidence? If I could persuade someone that my granny's knickers were in fact royal knickers, would that increase their value?)


And then there are pictures. Famous pictures are obviously of more use than knickers. People can enjoy them (well not The Scream. I've never understood the attraction of that one). But Van Gogh's Sunflowers is atractive, if (dare I say) hardly worth the sums paid for it. 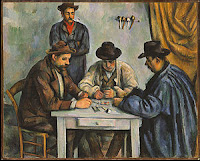 The Card Players by Cezanne (left) sold this year for $250m. It's a nice picture, but is it worth that much? And if it had been painted by, say, a talented sixth-former, what would it have been worth then?

And then, of course, there are footballers, who are paid obscene amounts of money, and (some) spend it very unwisely indded. No-one seems to mind about them. And "celebrities" (that word gives me the shivers), some of whom are just that, but haven't achieved anything at all.

Meanwhile, Titch was upset to learn that someone had offered a measly £1,000 for him (turned down, of course). That's a fourteenth of the value of the knickers. He's still trying to come to terms with that.
Posted by Frances Garrood at 10:53