Why I hate window cleaners 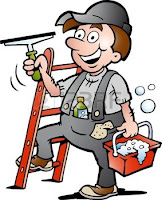 It's nothing personal, and I do admire anyone who can combine two of the things I most hate: cleaning, and heights. (Our house is on four floors, and the window cleaners teeter on the summit of a long ladder, with spiky railings down below, just waiting like the jaws of hungry crocodiles). So as a rule, I don't hate them. But this morning, I hate ours.

Picture the scene.Actually, better not. Because I was stark naked in the shower, and this bit of ladder and a head appeared at the window. I kept very, very still, and waited for the head to go, hoping it hadn't notived  me (we have a flmsy blind which is rather see-through). When I went next door to the bedroom to dress, the head was there again. It was all too much. I'm still trying to recover (so, I suspect, is the window cleaner. But then I suppose for him, it'sall  part of the job).

Afterwards, I asked very nicely if next time, please could he and his band of colleagues  knock on the door when they arrive, to let us know they're there.

"No time," quoth he. No time, that is, to knock on all the doors. But he said he'd make an exception for us.

So watch this space (so long as that's all you watch).
Posted by Frances Garrood at 11:36