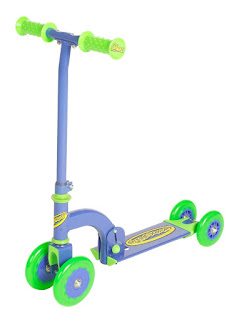 The words "self-assembly" strike fear into my very heart. Time was when things arrived whole and ready-made.They looked like whatever they were supposed to be.  But no more. Things that should have bulk and shape arrive in flat boxes with lots of screws (apart from the one that's always missing), and sheets of incomprehensible instructions.

So I left the cardboard box in the hallway for about a week, plucking up courage to open it. Then I thought,   how hard can it be, assembling a scooter for a two-year-old, especially for a woman (me) who fixed the broken interior of the dishwasher with string?

Readers, last night, I opened the box. There were screws - boy, were there screws - and flimsy spanners and allen keys (you always have to have those), and the kind of wordless instructions consisting of little picures of A fitting into B, and then D and E following fast. But they didn't. Not for me. It took me over an hour just to attach the handlebars with the kind of tiny spanner you might get out of a  Christmas cracker (the wrong size, and it kept slipping).

After an entire evening of frustration and pure rage, the scooter was almost done, But I couldn't fit the two main parts together, and worst of all, there were TWO SCREW LEFT OVER. What if a precoius grandson were to perish because for the want of two screw? It doesn't bear thinking about.

So lovely neighbour Alan (nothing to do with keys) now has it. He'll fix it. He knows about these things. I just hope that one day, he comes to me for help, and I can show him how to fix his dishwasher with string.
Posted by Frances Garrood at 12:17