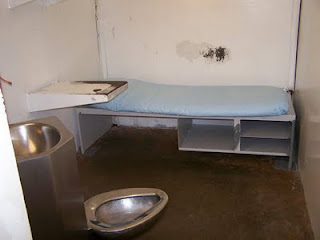 o
"They executed my friend R. I've known him since he got on the row in 2004...now he's dead, and I'll never see him again...I worked a deal with the law to get him fed when he went off and got gassed....The night he was executed I stayed up listening to rock music. Singing our favourite songs. I sang until I screamed and screamed until I was hoarse. It's still hard to realise he is no more...I refer to more of my friends in the past tense than I'd care to." And this is a man who says he doesn't know how to love.

Irving lives in a cell like the one in the picture; alone all the time. He's been there for 12 years. I read his heartbreaking letters, and sometimes they make me weep.

Whatever he has done - and he never refers to it - does any human being deserve to be treated like  this? He had an appalling childhood; not an excuse, but maybe a reason? He writes: "I once went to school, and for show and tell I showed them the belt marks and bruises".
Posted by Frances Garrood at 12:13