J is for Jokes 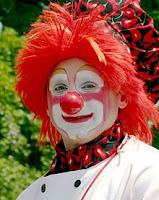 I am very, very bad at jokes. For a start, I can rarely remember them (the only one I have always remembered is so rude that there are few people I can tell it to), and I invariably spoil those jokes I can remember by telling them back to front (punchline first. Not funny).

John, on the other hand, loves telling jokes, and is good at it. But we disagree you don't find it funny, then you are not obliged to show more than minimal amusement. After all, the listener probably didn't ask for the joke, and the joker is sticking his neck out (and we all know what happens to people who do that). John, on the other hand, thinks that listeners are under some kind of obligation to laugh, because it's polite. To be fair, he does stick to his rule, for I have heard him laugh uproariousy at jokes which I know for a fact he has heard umpteen times before.

John has a stock of jokes, from the woman in the train (very funny**), the Lufthansa plane (mildly ammuusing), the bacon slicer joke (cringe) and the pot of paint joke, which has caused puzzlement to many of our friends, but which he thinks is hilarious, and persists in telling, despite my imploring him not to.

As I write this, the only jokes I can call to mind are very short and childish (grandchildren provide most of them).

Here's the latest from ten-year-old Harriet*:

Q Where do you find a tortoise with no legs?
A Where you left it.

And a contribution from my sister:

Q What do you call a boomerang that won't come back?
A A stick.

You see? I told you I was no good at telling jokes.

*She also told me a much funnier one, but I've already forgotten it.
** Just my opinion.
Posted by Frances Garrood at 09:12