O is for Old Age 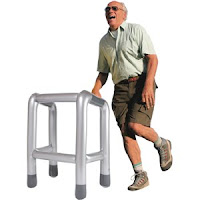 It's only since I've reached the hinterlands of old age that I've realised just how dismissively we/they are treated.

For a start, there are the jokes. Zimmer frames*, deafness, confusion - you name it, it's ok to joke about it. Not gays, not ethnic minorities, not the handicapped. Oh no. You mock them at your peril. But the old are fair game. Apart from anything else, they're unlikely to fight back.

In our society, the old become invisible; the wallpaper against which the lives of younger people are played out. In Japan, on the other hand, the old are considered to be society's treasures. They are valued and appreciated. But not here. Here, they are sidelined, ignored; considered at best an inconvenience, and at worst a nuisance.

But we (they) can fight back. Dye our hair, paint our toenails (if we can still reach them), refuse to conform to the sterotype. Ride a horse, join your grandchildren on the trampoline (I do both, notwithstanding my splendid new hip joint). Don't let the buggers wear you down.

And now, if you'll excuse me, I'm off to book a one-way ticket to Japan.

*The picture is of an inflatable zimmer frame. How hillarious is that?
Posted by Frances Garrood at 22:40