Nouvelle cuisine. Don't you just love it? Tiny decorative portions served on a 'bed' of something-or-other, garnished with a pretty little sprig or two and and sitting beside a miniature brightly-coloured lake (or 'jus' to those in the know).

But what really irritates me is the 'baby vegetables'. Since when have very small vegetables been babies? My dictionary definition of a baby is 'newborn or very young child or animal'. Not a vegetable. So what's this all about? Is it anthropomorphism gone mad? Is calling them babies supposed to make tiny little vegetables more attractive? Our local supermarket sells 'babyleaf salad.' No. It's not baby leaf. It's just immature, small or whatever. A lettuce is NOT A BABY!

I had 'baby vegetables' at a posh lunch last week; carrots thinner than matchsticks, tiny little leeks like blades of grass, and a minute green thing which looked like a weed that used to grow on our lawn. It tasted nice, but what a lot of work. What a lot of FUSS.

Give me grown-up vegetables any time.
Posted by Frances Garrood at 15:21 6 comments:

A small vignette of human life in a newsagent's yesterday. A woman trips and falls, everyone rallies to help, husband, who is waiting outside for her, is summoned. Having made sure she's alive (she's still lying on the floor at this stage, looking shocked and in some pain), he enquires whether she manged to buy the paper she came in for.

My small granddaughter is currently very upset because she is being teased for being the only child in her class who still believes in Father Christmas, and it set me thinking about the fine line in the lives of children between truth and fiction.

Obviously Father Christmas is a myth that we (or some of us) feed to our children; it comes from adults. But the imaginary world of children is far more complex. Most children seem to be born with fertile imaginations ("you be Robin. I'll be Batman"), just as they are born with the ability to pick up languages, and these gifts seem to be lost as time goes by. The small child often lives and plays within his imagination; but how real to him are the cars and dolls he plays with? How much does he really believe in them? One of my sons, in common with many children, had imginary friends; lots of them. They peopled his life, and woe betide anyone who ignored them. If you closed the door before they had time to get in behind him, he was distressed. If you sat on them, he was outraged. Yet how real were they to him? How much genuine substance did they have in his mind, and how far were they from (my) perceived reality? Occasionally he actually was the imaginary friend. I remember the following exchange when he was about three:
Me: 'Come on, Joe. It's time for your rest.'
Joe: I'm not Joe. I'm Bob.' (Bob was one of his favourites).
Me: 'Bob, it's time for your rest.'
Joe (indignant): 'I'm not sleeping Joe's bed!'
(I might add that the grown-up Joe appears to have little imagination, and probably couldn't write a story to save his life).

Which brings me to my point. I really believe that we all are born with imaginations and the ability to tell stories. Good, realistic stories. Some of us continue, while others fall by the wayside. It seems such a terrible shame. At what point is the childish imagination stamped out, and how does it happen? And why?
Posted by Frances Garrood at 09:13 5 comments: 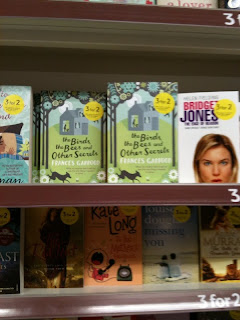 Photographed this morning by my daughter in her local Tesco's - Yay!
Posted by Frances Garrood at 14:32 7 comments: