One reason why I write to a death row prisoner

Texas death row inmates spend an average of more than 14 years awaiting execution in solitary confinement, posited by UT-Austin researchers as akin to torture, an assessment shared by several human rights organizations.The study comes amid a backdrop of prolific capital punishment in Texas, a state that executes more prisoners than any other state - by far. This year alone, 4 people have been put to death through the use of the drug Pentobarbital for various crimes: Christopher Wilkins, 48, executed Jan. 11; Terry Darnell Edwards, 43, executed Jan. 26; Rolando Ruiz, 44, put to death on March 7; and James Bigby, 61, executed March 14 (Source: Death Penalty Information Center).The 4 prisoners put to death this year all had been awaiting execution for years, and in once case decades. Wilkins had the shortest wait at 8 years, while Bigby sat on death row for 25 years, according to data collected by the Death Penalty Information Center.The prisoner with the longest time on death row is Raymond Riles, who has been sitting on death row for more than 41 years. Due to mental illness, he was previously considered ineligible to be executed, but prison officials said he could become eligible given continual testing of his mental state. In 1985, Riles attempted suicide by setting his prison cell on fire.

I have nothing to add to this damming report, except to say, again, that the prisoners in Texas are kept in solitary confinement ALL the time. "My" prisoner is currently in despair.
Posted by Frances Garrood at 16:07 14 comments:

Memory lane in the loft 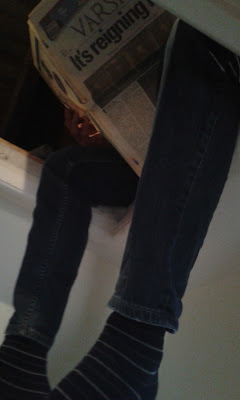 My son J and memory lane were made for each other. Home for the night, he decided to explore the loft (he's told me not to go up there  as there's no ladder). Here he is (or here are his feet). He's reading an old uni newspaper. That's about all I saw of him yesterday (his feet; not the newspaper). He went through his stuff, but sadly left most of it behind. He has a lovely new house, and clutter wouldn't look good. He also has a wife, who probably doesn't want it any more than we do. 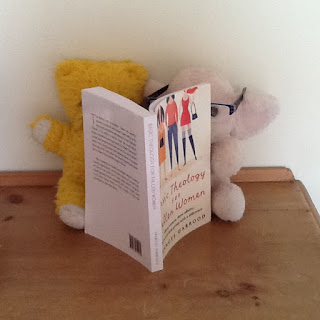 As you can see, they can't put it down. Basic Theology for Fallen Women in paperback. They couldn't decide who should have it first, so they're having to share it. Pinky likes the story, apart from the sexy bits (sex is a sore point with Pinky, because he can't...well, you know. Sour grapes and all that). Washing Instructions, who is a bit woolly-headed (well,  look at him), likes the nice shiny cover and the new cover illustration.

There's a new Kindle edition, too. Only £2.41. Just the price of a pint of beer, and that's without the pork scratchings. And it lasts much longer...
Posted by Frances Garrood at 16:45 9 comments:

The art of collecting clutter

The market for books on uncluttering your home is already flooded. I had one once, and a close friend has just sent me another. There's an article about a Japanese de-clutterer in today's Times (it's apparently the in thing in Japan). But I'm beginning to wonder whether it's really such a bad thing, hoarding clutter. I have a love-hate relationship with mine, and lack the determination to reduce it, because it's easier to love (keep) clutter than to hate (get rid of it).

A random (ie the nearest) drawer yields - among other things - the following:
An old mobile ( no drawer should be without one of these),
String (ditto).
A rather grubby half used candle.
A packet of ibuprofen; probably out of date and only two tablets left.
A very ancient first aid kit in a tin, inherited I think from my in-laws, and practically empty.
(And these are the tip of the iceberg.)

I looked at these things, and then put them back. Why? Because I have a certain fondness for their familiar randomness, and because I can't be bothered to sort them out and put them all in the Right Place (largely, the bin).

How do you feel about clutter? (I'd particularly like to hear from people who are attached to theirs, as that will make me feel better.)
Posted by Frances Garrood at 14:01 28 comments: