Musing on the subject of publicity, I thought it might be interesting to have a MNWers' calendar. You know - photos of us all, one per month, naked except for a book or an iPad or whatever. To be sold in bookshops, naturally. We might even invite someone like Hilary Mantel to make a guest appearance as, say, Miss August, with her Booker Prize trophy (is there one?) covering...something.

So - if you were to take part, what item would you use to preserve your modesty? And which line (or two) from one of your novels would you choose as the quote of the month?
Posted by Frances Garrood at 14:40 8 comments:

Has anyone noticed recurring themes in their writing? I don't mean plots, but themes, phrases, subplots. Because I have just noticed a rather alarming one in my novels: animal funerals.

How could I not have noticed that in all three of my books (the two puboished, and the WIP) there is an animal funeral? But there it is. As I buried my third animal yesterday, I realised that I had done it again. and this is probably not a good thing.

I've no idea where these anmal funerals come from. I'm not a great animal lover; I'm not especially preoccupied with funerals of any sort. I suppose it could come from years of pet funerals, courtesy of the tendency of my children's small furry friends to meet premature deaths (as often as not, courtesy of the cat). I suppose these were quite moving occasions. I remember the funeral of Wilfred, a hamster who unwisely went walkabout (and met the cat), and was buried with this touching little note (miss-spellings the owner's own): "dear Wilfred. I love you and I miss you very much. I hop you have a nis time in heven". And there was another funeral, where my eldest son goose-stepped down the garden, carrying the tiny corpes in a shoe box on his shoulder. I'm not sure he was taking this entirely seriously, but the bereaved owner didn't notice.

And then there was the time I buried the cat.

It was February, the ground was rock hard, and I could only dig a shallow grave. To add to my difficulties, rigor mortis had set in. Of course, I should have waited for it to pass off, but I was in a hurry. So there I was, with this very stiiff cat, its limbs sticking out in all directions. trying to fit her into her grave. Every time I had three limbs buried, the fourth would still be sticking out. Poor Marigold. She had led a relatively blameless (and very long) life, if you forget about all those murders, but her funeral was not a dignified one.

So maybe that' s where this all comes from. But now what do I do? do I get rid of the third funeral? Does it matter?
Posted by Frances Garrood at 08:12 11 comments:

Of presents and charity

I love giving presents, and I love receiving them, but present-giving isn't what it was.

Take, for instance, this practice of giving to charity instead of giving a present. I'm all for giving to charity - I give to charity, of course I do - but when a friend gave me a water buffalo for an African village as a birthday present, I was seriously annoyed. I never got to meet the water buffalo; I don't even know what a water buffalo is (a buffalo that swims, presumably). I might, if consulted, have chosen a goat, or a pig, or a camel. But no. It was the water buffalo. I've no idea how this animal is, whether its recipients were more pleased with it than I was, even whether it has a name. Add to that the fact that my friend* presumably felt all warm and fuzzy, because she considered that she had given me a present, and she'd also given the Africans a water buffalo. This is cheating. If you want to give a present, give a present. If you want to give to charity, then do that. But don't try to combine the two, because it just doesn't work.

I was reminded of this because at my one of my grandchildren's schools there is a growing custom for the invitation to have this little addendum: "Michael (Josh/Paul/whoever) doesn't want you to bring him a present this year. Instead he would like you to give a donation to a leper colony (or whatever)". Like hell, he would. Poor little kid. The parents are trading their son's happiness for the warm fuzzy feeling.

* She's not a friend any more, but not because of the water buffalo.
Posted by Frances Garrood at 19:03 6 comments: 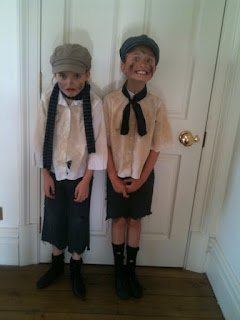 I'm escaping from the world cup again (South Africa 0 Uruguay 1 at this stage). This is a photo of my granddaughters dressed as Victorian tramps/orphans/whatever. I know, I know. Terribly boring, but it was this, the footie or the WIP, and I've reached a plateau with the WIP (exhaustion after all that sex).
Posted by Frances Garrood at 21:03 4 comments: 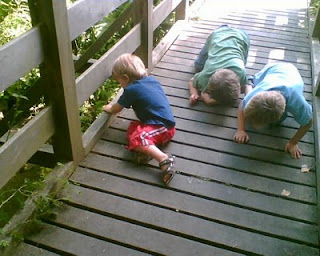 Another diversion from the world cup - an advanced version of an old game (you watch your stick for its entire journey through the slats of the bridge) as played by grandsons William, Freddy and George on a lovely picnic yesterday.
Posted by Frances Garrood at 10:59 3 comments:

The little flags are fluttering from cars, Wayne Rooney has already been very rude to someone, silly shirts and hats are selling like hot cakes (does anyone ever buy, never mind eat, hot cakes?). It's World Cup time.

I always assumed that this was for football fans; that the rest of us simply put up with it, or turn to another channel. Not so, apparently. My eldest son, who hasn't kicked (or looked at) a football since he was made to at school, who is totally unathletic, and whose interests are so esoteric as to leave me permanently baffled, is furious because he's missing the first World Cup match. I was amazed, and said so. "But everyone watches the world cup," he said. "Not me," I told him. "Don't tell me you won't be watching!" said he, shocked. But I won't. I don't want to, I'm not interested, I DON'T CARE.

Does everyone really enjoy the World Cup? Please tell me I'm not alone (and where I can buy a Not the World Cup tee shirt).
Posted by Frances Garrood at 13:42 7 comments:

Tim Stretton has posted on his blog Acquired Taste www.timstretton.blogspot.com on the subject of reality, and it got me thinking. It seems that for some of us at least, the boundary between truth and reality is fragile, if not occasionally non-existent. We have all heard of people who duff up actors who play nasty characters on TV soaps, but I was amazed to hear on the radio the other day that thousands - yes, thousands - of people write every year to 'Juliet' in Verona to ask for advice with their love lives. A team of voluteers apparently deals with these requests (I'm not sure quite how), and the letters keep on coming.

If people confuse truth with fiction to this extent, how on earth do they conduct their lives without being in a continuous state of unbearable stress? For anyone watching Coronation Street this week (I know, I know. My son has just ticked me off. It's all utter rubbish, but I love it), and taking it seriously, the only solution must surely be to throw him/herself off the nearest bridge.
Posted by Frances Garrood at 09:38 2 comments:

If you need cheering up on a Monday morning, try this: http://www.youtube.com/watch?v=wp_hzrB_FI4
Posted by Frances Garrood at 23:29 No comments: