I know, I know. Everyone's talking about it, either to rejoice or to tut  about the fuss, and the expense, and the privilege blah blah blah.

I know for a fact that several of my (esteemed) followers are against the royal family, but I think we're incredibly lucky. We have a Queen who is the envy of (much of) the world;  who is loyal, charming, dutiful, and best of all, apolitical. When I think of politics, I see grey mist. With the royal family, it's colour and coaches and stunning horses (oh, those horses!), and happy, cheering crowds. Billions of people around the world watched the last royal wedding. Who or what can match that? Like it or not, our royal family give a great deal of pleasure to a great many people. And I'm one of them. After all, no one has to take any interest if they don't want to. Just don't read the papers for a week or so.

I've no idea what the future will hold once the Queen has gone,  but for the moment, we have a royal family to be proud of. At a cost of just 50p a year each.

I, for one, think that's a bargain.

(I'm also a huge fan of Meghan Markle, not least because Suits is our favourite TV programme, but I know that's beside the point.)
Posted by Frances Garrood at 14:08 13 comments: 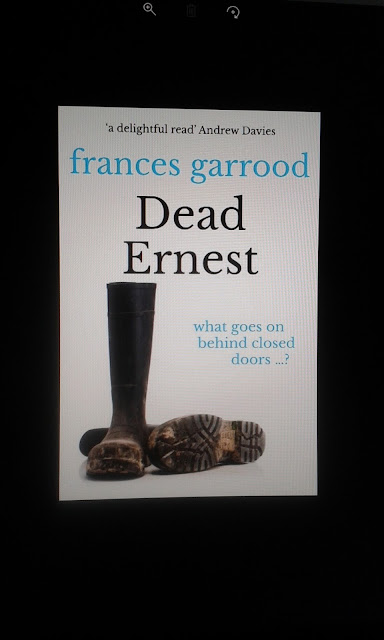 This is the new cover for Dead Ernest, which is being re-issued in the new year by Sapere Books. I think it's much better than the old one, except that Ernest would probably  have cleaned his boots. But you can't win 'em all, and I really love it. (.And Ernest's still dead, so he can't complain.)
Posted by Frances Garrood at 15:25 19 comments: 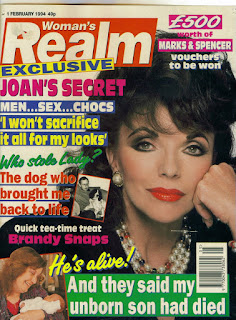 Sadly, I've decided not to write any more magazine stories. Since writing longer fiction, I've found the short stories harder and harder, and I no longer enjoy writing them as I used to do. Time was when I was earning about the same writing them as I was in my (part time) nursing job, but I just can't do it any more. I've lost both the urge and the knack. Plus, changes in some of the magazines have been sad and difficult for all of us, with familiar names vanishing. Perhaps it's just that I'm getting old...

I sold my first short story to Woman's Realm nearly forty years ago, so it probably really is time to say goodbye. But it's been fun; sometimes disappointing, sometimes rewarding, and over the years, I collected my fair share of rejections. My last short story appeared in November's W W Fiction Special. That magazine and I go back a long way, so it seemed a fitting place to end.
Posted by Frances Garrood at 15:08 27 comments: 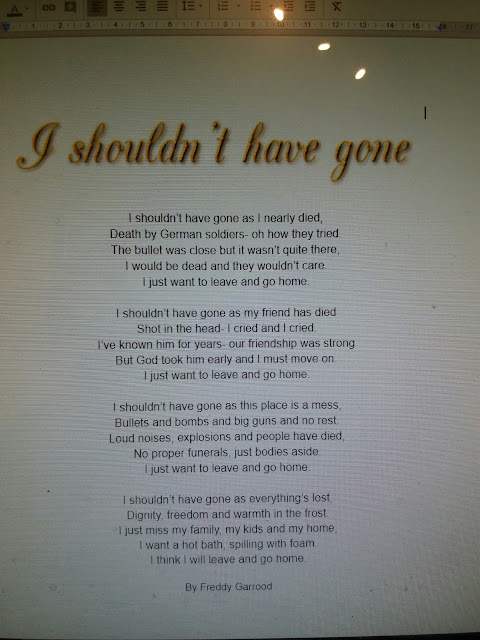 My thirteen-year-old grandson has just written  this. It says it all.
Posted by Frances Garrood at 21:56 10 comments:

The hell that is children's parties 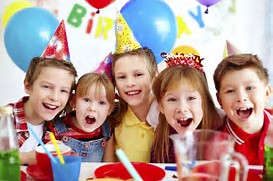 Watching the BBC's very funny series, Motherland, I was put in mind of my own experience of giving children's parties. And there were many. Among other things, I learnt never to:

1. Give a party that lasts more than an hour and a half (if the invitation says "2pm - 5.30pm, the mummy concerned is a beginner. She won't make that mistake again).

2. Invite the naughtiest boy in the class. I know, I know. It's cruel to leave one child out, but by the time he's opened all the presents and trashed the cake, you'll see what I mean. And that leads me to:

3. Invite the whole class. Unless you live in an unbreakable castle, with sturdy ramparts and electric fencing round the moat, the whole class will be TOO MANY.

4. Invite the parents in with the children. They won't help; they'll stand round gossiping and expect tea, and probably wine. Plus, they'll see what a hash you're making of things, and you won't be able to shout at their child.

5. Leave the doors unlocked. At one memorable party, about ten little girls danced out into the garden and disappeared.

6. Let small guests into bedrooms. My daughter was mortified when a bevy of small boys broke into her bedroom and trashed it.

7. Admittedly this is unlikely to happen, but don't  let the birthday child make a speech. At one party, my youngest son decided to stand on a chair and give a vote of (undeserved) thanks to me. He was promptly heckled, and reduced to tears.

8. Encourage your child to request a cake in the shape of something (Batman, a fairy castle, Barbie's horse etc). Tell him or her the the best cakes come in the shape of a cake. I have in my time made cakes in the shapes of, among other things, various animals, a farm, a truck etc. This takes hours, and the results invariably taste horrible.

9. And finally, don't give another party if you can help it. Ask your child to invite one civilised and well-behaved friend and take them both to the zoo, the cinema, Macdonalds - anywhere but your home. Your child won't get as many presents, it's true, but he or she is unlikely to end up in tears. And he'll have a calm, happy parent. Which, as we all know, is the thing every child needs most 😀

So there I was, sitting in my booked seat on the train home from London, with my book at the ready and a relaxing hour of travel ahead. It had been a lovely day - lunch with some of my Macmillan writer friends, and dinner with a son. All was well with the world. Or so I thought...

When the train started early, I felt smug. Good thing I got here on time, I thought.  How sad that all those people who arrive on time will miss it. Ah, hubris...for nemesis was soon to follow.

For slowly, a thought came to me. Trains don't usually leave early (fifteen minutes early, to be precise). Better check the booking ticket attached to the seat. I turned and looked at it. Oxford, it said. OXFORD! I didn't want to go to Oxford! Panic!

With help from a lovely man with the right kind of mobile, which had all the trains and times on it, I discovered that my (Oxford) train would arrive at Reading about 5 minutes before my (home) train. a five minute window in which to change trains. Hm. Reading is a very big station. Time to get professional help.

To cut a long (or longer) story short(er), I found a lovely guard, and the man selling snacks, both equipped with those right kinds of phones, with timetables, and updates. My (Oxford) train was running late; my (home) train was on time. Bugger.

But with much encouragement from both, I did what for me is quite a sprint up and down escalators between platforms, and just caught my (home) train. Phew.

The moral of this story is: IF YOUR TRAIN LEAVES EARLY, YOU'RE ON THE WRONG TRAIN.

I have been repeating this mantra to myself ever since. (Oh, and I wrote to Great Western Railways to congratulate them on their wonderful staff. I do hope my two helpers get the message.)
Posted by Frances Garrood at 16:01 18 comments:

I am absolutely appalled at the treatment of Kevin Spacey and others in the press and other media in the latest spate of sex accusations. What have we come to? Whatever happened to innocent until proved guilty? "Sleazy Spacey" was the Sun's headline, and even the Times had a front page photo and half page spread.

Now, I have no idea whether or not he's guilty, but whatever the final verdict, the affect on his career, his life and his family will be devastating, as it will be with Fallon et al. And of course, if they are found to be guilty, they must pay the price. But what if they're innocent?

Meanwhile, "unnamed" individuals come forward with more accusations, for their anonymity is of course protected. I am no defender of sexual offenders. In my many years of counselling, I came across a great number of people who had been seriously sexually abused, and many cases were quite heart-rending; lives and relationships destroyed for ever. But it is because crimes such as these are so serious that we should be very careful about how we treat suspects before they are convicted.

As for the lesser offences, is there any woman alive who hasn't  had an uninvited male hand on her knee? (I have, and worse).  Very unpleasant, I agree, but hardly on the same level as sexual abuse. And it's usually perfectly possible to move away.
Posted by Frances Garrood at 16:04 15 comments: