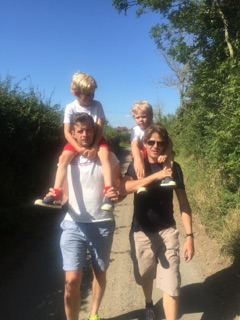 Our family have just had the most fantastic bank holiday weekend in a Jacobean mansion on the Somerset/Dorset border. Eighteen of us (my children their partners and their children) had a wonderful time playing silly games and consuming industrial amounts of food and drink. Special thanks to Nicola and Cosima for masterminding the Sunday lunch. A real banquet.

The photo is of my two youngest sons and youngest grandchildren on the way back from the pub (no holiday is complete without a pub, right?)
Posted by Frances Garrood at 22:10 14 comments:

According to author Robert McCrum, in his new book Every Third Thought, every third thought of those of us over 65 is about death.

I have never seen death mentioned in a blog post (apart from in the context of personal bereavement), and thinking about it now, that seems strange. After all, life and death are the two basics we all have in common. We are alive, and we are going to die.

I fall into McCrum's age bracket, and yes. I think about death a lot. And it's not a prospect I relish. I feel like Woody Allen, who famously said that he wasn't afraid of death; he just didn't want to be around when it happened. I think I feel the same. I do have a fragile faith, but will it stand up to this final challenge? Quite possibly not. I regularly read the late great Elizabeth Kubler-Ross's book, Life After Death, because I find it comforting. She was a doctor who worked all her life with dying people, and she had no doubt at all that there is a (good) life after death. Am I pathetic? Quite possibly.

And yet it is hard to imagine a futureless ( for me) world. I remember laying out the body of a twenty-two-year-old girl. This was terribly sad, as these things alway are. But what I found especially poignant was that she had painted her toenails (blue). She knew she was going to die, and she was very frightened, but those sky blue toenails were like a small fragment of hope; a little stake in a future which wasn't to be.

And I can understand that.
Posted by Frances Garrood at 19:04 26 comments:

Uses for an outsize cardboard box: No. 1 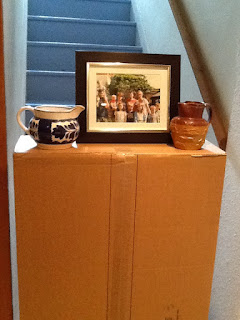 Well, since Amazon have declined to repossess their box (see previous post) I shall put it to good use. This is use no. 1. The photo is of all of my descendants (apart from one, who was born later. It's an old photo). No matter that we can no longer go up the kitchen stairs; I like seeing my family, and the two ancient jugs inherited from my parents.

Labels: uses for a cardboard box 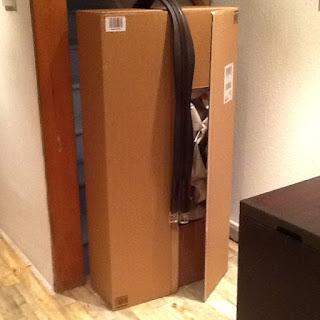 When this box arrived, I wondered whether I'd ordered a small bed or a fridge in my sleep. But no. It simply contained a (horse's) girth, as seen draped over the box. Oh - and lots of that drapey brown paper beloved of Amazon, to fill up the considerable space around it.

Now I have three problems:

1. This  thing will have to stand in the kitchen until I've tried the girth for size (I've been ill, and haven't been near the horse for a week), as I shall have to use the box if I need to return the girth. The box takes up a lot of room.

2. The box will take a lot of flattening, and will be hard to fit into the little recycling bags we're given.

3. Managing my indignation at this sheer waste.

So - I shall email Amazon and ask them to collect their box (which is presumably now my box) as I am giving it back. They can deal with it.