The apple can fall a looooong way from the tree.... 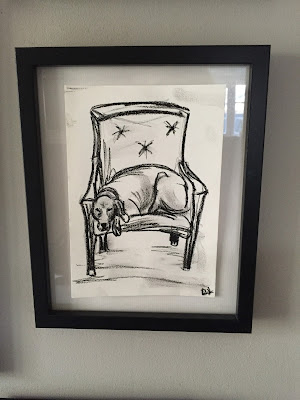 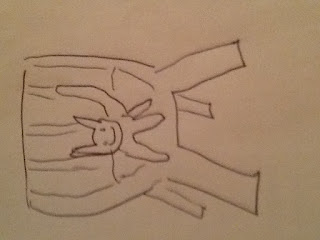 Mine (to view, tilt head to the left, please. It won't go the right way up).

See what I mean?

These are the things I have not managed to do:

1. Be be more organised.
2. Waste less time on the Internet.
3. Write every day.
4. Be nicer about X (who is horrible to me, and most other people as well).
5. Make lists and stick to them. Well,  I have made the lists, but I cheat, by writing down things I've already done and then crossing them off. This pleases me. (I'm easily pleased.)
6. Give up The Times "difficult" su doku. I just can't. It's sooooo satisfying (goodness knows why).
7. Take more stuff to Oxfam (I've taken some, but not nearly enough).

Then lovely daughter said, "but Mum - you can't keep resolutions because that means changing yourself!"

And she has a point, even  though it means I'm lazy, disorganised, incapable of sticking to lists etc. etc.......Sigh.

But she seems to love me as I am, so maybe there's hope after all.
Posted by Frances Garrood at 13:58 35 comments:

She'd always managed to avoid flying, and despite the circumstances, she felt ridiculously nervous. Should that wing be trembling like that? And the whole plane seemed to be tilting; were planes supposed to tilt? She turned away from the window, and sipped her glass of champagne. She hadn't had a drink for a long time, but it wouldn't matter now, would it? Nothing really mattered now.

"Have you got the tickets, dear?" She asked.
"Yes, Mum." Her daughter forced a smile."Here's yours. See?"

Her eyes blurred with tears, she showed her mother her ticket. Her one-way ticket to Switzerland... 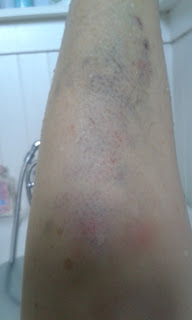 Graham has kindly (?) mentioned in a recent post my adventures on and off horses. What I suspect he doesn't know is that one of the most painful kinds of horsey injury is what I call "gate leg". Here is what you need to do to acquire one of these (the photo is of my gate leg incident last week):

1. You are on a horse, which is keen to get home. Find a narrow hunting gate.

2. Open the gate. This needs to be the kind that swings back, and is hard to negotiate.

3. Hold the gate open with one hand, and the reins loosely (too loosely. It's important that you have as little control as possible over the horse) in the other.

4. Line the horse up so that one of your legs is directly aimed at the gatepost. The horse, keen to get home  (see above) will shoot through the gateway, secure in the knowledge that he at least will get clear.

5. Your leg slams directly into the gatepost, at speed. 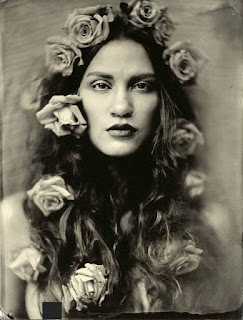 OF A SHY GIRL AT A GARDEN PARTY

"Oh, what can I do with my hair?"
Poor Amelia cried in despair.
"The answer, I s'pose, is
To fill it with roses.
And then, at a push,
They'll just think I'm a bush.
And no-one will know that I'm there."


(With thansk to Tess at Magipe Tales for the picture)

The insensitivity of today's cold caller

I have several ways of handling cold calls, most of them polite. I've  just used one of my (usually) more successful ones. It didn't work.

Etc.etc. I was quite upset. This has never happened before. They usually ring off, and, on a good day, I get condolences, too.

I'll have to think of something else for next time (though - some weeks ago - telling the ambulance chaser that I'd lost both legs was quite fun).
Posted by Frances Garrood at 16:52 27 comments:

Anyone for a tea towel?

I was approached recently by a small company asking me whether I would be interested in reviewing their tea towels. I was offered a choice of any two - free of charge - to try out.

Intrigued, I replied that yes, I would, but it would be an honest review. Fine, Al (the company's owner) said. He was prepared for me to publish my findings, whatever they might be.

Now, let's be honest; there are few things (to me) less interesting than a tea towel. But, there are few things more essential. We all use them.Personally, I prefer the old, soft, holey ones (and believe me, I have a huge collection of these), but all tea towels start off new and relatively stiff.

My findings:
Firstly, I liked the fact that this is a small company, specialising in  a single product. Al was approachable, replying immediately to my emails, and happy to share personal details about himself and his company. My parcel arrived nicely packaged, and the tea towels are attractive (below is one that I chose). There is a very wide selection of designs, from old masters to humorous to birds and animals.They also have a useful loop for hanging (most tea towels do not). I like this, as I never sew if I can help it, and wouldn't dream of sewing a hanger into a tea towel. They are priced between £5-10, which seems average for a qulity tea towel, and importantly (to me), P&P are free. His comprehensive website can be found here.

I emailed Al to ask him about his company, and why tea towels, rather than anything else, and I'll leave the last word(s) to him: 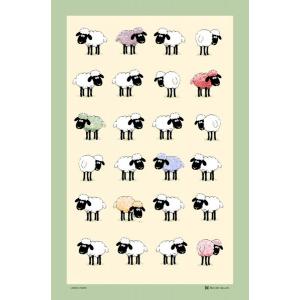 I am Al (male), self-employed, and I run the business from a spare bedroom on the edge of the Mourne Mountains in Northern Ireland. I have been selling tea towels now for 7 years, and I have a great fondness for their artwork and feel. I personally hand check each tea towel before packing to ensure it is to a pleasing standard that I would be happy to receive. I enjoy sourcing new designs and also enjoy carefully packing orders for customers.


Why tea towels? WhenI was an early teenager, I bought my first tea towel on a day trip to Ayr in Scotland. I was fascinated by the colours and souvenir design, and that started me off. It's nice to go to different places and be able to buy a tea towel memento, and when you use the tea towel in later years or take it out of storage, it reminds you of your day out.


I was looking for something to sell to start the business, and I thought what could be better than designer tea towels. Tea towels that I am into and have a passion for. Usually in bricks and mortar shops, the range of designs are limited, so I thought I would create a website that showcases lots of tea towels from various designers. A growing collection of tea towels that you would not see together in the shops.


Quite a few of my UK customers have purchased to bring on holiday to family and friends (the counties and regions designs being popular for this purpose), and some customers like to purchase and have the tea towel sent directly to the gift recipient with a message enclosed. I write the message onto a gift card, free of charge!


I think that says it all!