The makings of a responsible father

This  was posted on Facebook by one of my sons last night. He's a lovely daddy, but still learning (like most of us)... 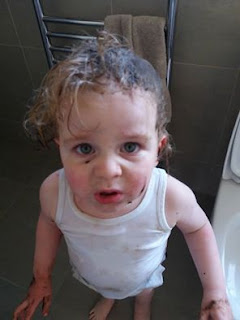 Note to self. When getting football out of ditch don't take eyes off the baby
Posted by Frances Garrood at 11:52 8 comments:

Please give me my extra s!

I know I bang on about punctuation, but one of the things that annoy me the most is the way people puctuate the possessive of a word or name ending in s. Thus, anything belonging to me becomes Frances' as oposed to Frances's. I am not the plural of France; I just have a name that ends in s. I would love to have been called Catherine (because I like the name, but also, it doesn't end in an s. And anyone with the name of Catherine is unlikely to be called Sir or offered Russian brides, both of which frequently happen to me). Also, I  don't much care for my own name, but I'm stuck with it. (I'm often Fran, which doesn't end in an s, and is more friendly.)

The ramblings of the subconscious

Although I've decided not to blog so much recently, I just had to make use of the dream I had last night. So here goes.

Picture the scene. The vet was due to visit Blue ( my horse) today, but my subconscious had obviously decided to use this as a plot for a most bizarre dream. Hence, the vet, rather than being  very male Oscar, was a woman unknown to me (although since she called me Fran, we must have know each other). With her she brought an enormous sheep called Gillian, who sported a rather splendid coat. This nameless female vet said the treatment would involve three visits, and this seemed to be because she was still breastfeeding her baby, who I think was called Philip.

(In fact Oscar came, and treated Blue - who wasn't at all brave - and all was well. I told Oscar my dream. He looked perplexed. He doesn't have a sheep called Gillian.)
Posted by Frances Garrood at 13:46 24 comments: