So here I am, on my own (husband playing bridge. I don't have the brains for bridge), and I think to myself - Christmas presents! I'll start doing my Christmas shopping online.

New daughter-In-law needs news slippers, so I think, there's an idea. Text son for DIL's size. Receive amused text from DIL herself to say I'd texted her by mistake. Bang goes the surprise (if indeed it would have been a surprise). Unhelpful text from son to say what a terrible spy I'd make.

Do a bit more browsing and find nothing (we have a big family and lots of present to buy, but I am desperate to get things people will really like, so it all takes Time). Phone daughter, but she's watching Coronation Street and just want to know whether Nick knows the baby isn't his. I tell her he does (I'll catch up,with CS tomorrow. We're addicts). Daughter is curled up on sofa drinking wine. I am not. Suffer pang of jealousy.

Receive phone  call for Moira. I am not Moira, and nobody called Moira lives here. I tell the caller she's mistaken (I'm very nice about it), and ring off. Then wish I'd said I was Moira, because that might have been interesting; fun, even. Now I'll never know who Moira is, and she'll never know the tiny part she played in my evening. But I hope Moira is having a better time than I am. At least someone wants to talk to her.

Post on my blog for the second time today ( a record).

Back to the drawing board.
Posted by Frances Garrood at 20:34 12 comments: 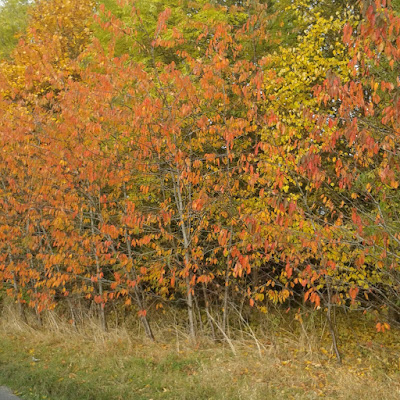 The colours this autumn are just amazing. I had a wonderful ride this out morning, and I admired the leaves and the berries while Blue tried them out for flavour. It was one of those mornings when you are perfectly happy for no particular reason (except that I feel so lucky to have this lovely animal, and the beautiful contryside of Wiltshire in which to ride him).  I think you (I) need to be older really to appreciate things and not take them for granted. As child, as I vaulted onto my pony from its rump end and careered about falling off every five minutes, I don't think I stopped to think how lucky I was.
Posted by Frances Garrood at 17:26 21 comments:

An experiment in cliches

I thought I'd see how far I'd get writing something using mainly cliches. It's harder than I thought. If anyone would like to continue this sorry tale in the same vein, feel free.


Across the manicured lawn of their house in the leafy suburb of Codminster, a couple sat in companionable silence. Suddenly, they were disturbed by a sickening thud. It was every parent's worst nightmare!

Her parents were devastated.

"She was our beautiful baby girl,' they wept. 'So passionate about everything. She always gave a hundred and ten percent of herself, and now she's gone.'

With a limerick, try, if you can,
To ensure the appropriate scan.
If you write it like this,
I'm afraid you will miss
The wonderful prize I'm giving for the best Limerick.

I'm puzzled at the number or people who can't write limericks that scan properly (not my erudite readers, naturally), so I'm offering a small mystery prize for the best limerick on the subject of ...writing limericks. Winner to be chosen by the readers.

No rules, no fee. I'm just trying to make sure at least some of you waste some time, too. It'll make me feel better.
Posted by Frances Garrood at 14:05 32 comments:

The things some people eat

The other day, someone (a son, possibly) mentioned "live frog sushi", and I thought,  surely not. There just cannot be such a thing....can there? Reader, I foolishly googled it.

I stood it for about five seconds, and then switched off. But I cannot get out of my head the pathetic image of the severed top half of a poor wretched frog, waving its arms and gasping from its all-too-human-looking mouth on a bed of something weird on a serving plate.

I told my brother about this on the phone, but before I'd even said don't google this! he already had. I just hope he's now sleeping better than I am.
Posted by Frances Garrood at 14:47 19 comments:

I read this week that the writer Jilly Cooper has said that self-publishing is vanity publishing, and this set me thinking. After all, isn't all publishing vanity publishing, in a way? We write something,  and if we are reasonably happy with what we have written, we (or most of us) would like other people to read it. Does that make us vain?

Well, yes. A bit. If thinking we have created something that others would like to read is vanity, then we could be called vain. But I cannot see that that applies to one route (self-publishing) rather than the other (publishing by a conventional publishing house). I have used both routes, and on reflection, if I'm vain at all, I think being published is more  vanity-inducing than doing it myself. After all, it's lovely to have the imprimatur of a major publishing house, isn't it?

And yet most writers that I know are rather self-effacing and modest*; bad at self-publicity and terrible at book-signings. A paradox, perhaps.

What does anyone else think?