I've been very quiet on the horse front as all has not been plain sailing. First, Fairfax had an overreach (technical speak for a self- inflicted cut), and then was kicked, resulting in a nasty ( and hideously expensive) cut on his leg. He was having problems settling in, and none of this has helped.

So. Back to work this week, after another two weeks shut up in his box. All well - ish - until yesterday.

Off we set, with another horse for company. All well until companion became unsound. Don't worry, I said. You go back. Fairfax and I will carry on a bit further.

It took Fairfax about thirty second to realise that we were on our own, and then all, and I mean all, the toys were thrown out of the pram. His is a big pram, with a lot of toys. He leapt in the air, and then bucked his way back to his companion and tried to gallop home.

" I didn't think you were going to stop!" said companion's rider.
Neither did I. But we did. And returned home in triumph (Fairfax) and shame (me).

"Don't ever, ever do that again!" said the lovely yard manager, who keeps an eye on me.

And Fairfax? He's just fine. Thanks for asking.
Posted by Frances Garrood at 13:50 22 comments: 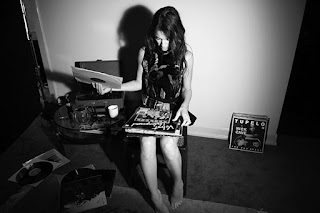 There was a young lady called Inga
Who dreamed of becoming a singa.
Her collection of discs
Looked exactly like this,
And included John, Paul, George and Ringa.

(With thanks to Tess at Magpie Tales for the picture)
Posted by Frances Garrood at 18:11 6 comments:

...not  Frances'  blog. I am not the pleural of France, therefore why am I not allowed that extra s that is given to other people's possessives?

This is a common misuse. It appears regularly in published books and newspapers. Any noun that ends in an s - personal or not - is refused that extra s for its possessive (Jesus', Mavis', Boris'  etc etc).

This has been bugging me for some time, and now I've finally got it off my chest. Phew!

(My iPad refuses to use my name at all, and calls me France's unless I manage to stop it in time.)
Posted by Frances Garrood at 09:38 17 comments:

Patsy has a post on the famous opening line: "It was a dark and stormy night", and this got me thinking about opening lines. Just out of interest, what is the opening line of your current WIP (novel, short story, poem or whatever)?

For what it's worth (not a lot at the moment), mine is:

Okay. You've done what you came to do. You've stripped the leaves from the trees, chucked every kind of precipitation you can at us, tipped us over on frozen pavements and filled A&E departments with broken limbs. You've helped retailers sell woolly vests and those hideous furry boots, and prevented (some of) us from riding horses or going for walks. Plants have had the necessary hibernation period to help them do their thing in the spring. We have put on layers and shovelled snow and played our part, and if all this was intended to strengthen our characters, then I for one can assure you that  my character is now very strong indeed. In other words, you have SERVED YOUR PURPOSE.

Now, please, please will you just go away?

The mystery of the number plate

Well, the personalised number plate, to be exact. I cannot for the life of me understand the appeal of these. I try to suppress my prejudice, but it will keep bubbling to the surface, screaming the one question: WHY?

But reading yesterday that the plate PEN15 (geddit? Ha ha. Hilarious, eh?) is going for (wait for it) a staggering £90,000 left me speechless (well, almost).

Please, can anyone explain?

The self-indulgence of (some) poets

I don't read a lot of poetry, but am deeply fond of many poets.  Keats, Tennyson, Houseman and of course Shakespeare all spring to mind. But some poets....oh dear.

Take Herrick. "Fair daffodils, we weep to see you fade away so soon".

No, we don't. Weep over daffodils, that is. Or most of us don't. The daffodils have died. Get over it. There'll be more next year. Have you nothing better ( or worse) to weep over? (these immortal,lines came to me as I was throwing out some dead ones).

Daffodils seem to bring out the worst in poets. Take Wordsworth, "wandering lonely as a cloud" among his. Many people would give a lot to have the time to wander about among daffodils.
I bet poor Dorothy didn't. (I have to say that I find that poem particularly irritating.)

But Keats's wonderful "knight at arms, alone and palely loitering". I'm sure he really did have problems.

I'll stop grumbling now. It's all because snow makes me grumpy.

Now I've got to go and borrow a shovel before our sprightly neighbour, who is considerably older than I am but has ten times the energy, gets there first.
Posted by Frances Garrood at 09:37 14 comments:

...one day last week in the street. An elderly couple shopping:

She (plaintively): I only wanted a little diary!
He (crossly): Then you can buy it yourself!

And I thought, how sad. Once, they may have held hands, kissed, made love and maybe babies. Then he would probably have been delighted to buy her a big diary, embossed, in leather. And flowers as well.

A tale to melt the hardest heart

Mrs. Edith Habama lives in Jordan. I say lives, but she is actually dying. She's widowed and childless, and before she dies, she wants to make sure that I can use her $7 million. She doesn't know my name, or anything about me, but she takes the trouble to email me with her wishes. Aaaaah.

Various other people in equally dire circumstances want to give me huge sums of money. There is a constant trickle of these tempting offers in my in box.

I feel so fortunate. Now I shall never have to write another word.  Rejections will be things of the past. I shall be rich beyond the dreams of avarice. I might even buy a Smart car (something I hanker after because parking in Devizes is a nightmare. Of course I shall stay on in Devizes).

Dear friends, I shall try not to make all this bounty change me. Please address any begging letters to my accountant. He's snowed under at the moment, but he will let you know when he's free. Thank you.
Posted by Frances Garrood at 16:25 13 comments: 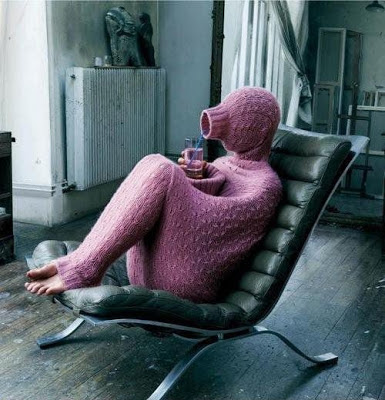 THE WORLD'S MOST VERSATILE KNITTED GARMENT
(Available in dusky rose, one size fits all)

Wear this sideways, upside down,
Or even wear it inside out.
This covers legs and face and arms;
(Drink or watch telly via the snout).
Deters the cockroach, wasp, mosquito -
Plus, you can travel incognito.

(With thanks to Tess at Magpie Tales for the picture)
Posted by Frances Garrood at 10:34 17 comments:

...you've trained the young unemployed; you've done your thing in schools; you've opened restaurants and written books. Now, would you please turn your attention to hospitals?

Hospital food is disgusting. Every hospital I've ever been connected with serves horrible food. I know they have a tight budget, but (for example) do they really have to serve soup at every meal? How many people have soup every day before their main meal? It's not necessary. Plus, have you ever tried to consume soup in bed? If you're flat on your back (as I was, for five weeks) the soup ends up in your ears. Trust me. I know. If you're old or frail or just ill, conveying soup from bowl to mouth without incident is a hazardous undertaking. Omit the soup.

Then, meals could at least be made to look atractive. If you don't know what you requested, the odds are you won't be able to identify it when it arrives. One patient of mine (admittedly, years ago, but things haven't changed much) said, when presented with his meal: "I've often trodden in it, but no-one's ever expected me to eat it." Nuff said.

I could go on. And on. But I won't, because you get the picture, and  I know you can do what hospital caterers have long failed to; feed people edible food on a budget.

Except that I didn't. Buy cards in Teignmouth, that is. On 23rd December.

But that's what my bank statement says. It tells me I spent £9.98 on cards in Teignmouth. Does the bank think I've nothing better to do than traipse down to Teignmouth to buy cards, just before Christmas, when Devizes has more card shops than anywhere else in the country (or so it seems)?

So someone, somewhere (Teignmouth, presumably) is using my card, or it's identical twin, to buy cards. Odd, that. I never think of fraudsters, even minor ones, as bothering to send people cards.

Will they strike again? Watch this space.
Posted by Frances Garrood at 20:13 19 comments: 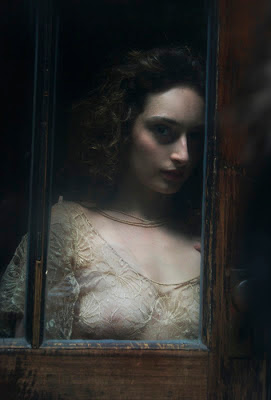 Rapunzel's hair, Cleopatra's face,
As female features have their place.
But Beatrice had a better plan:
"I'll use such assets as I can.
For limpid eyes or shapely hip'll
Ne'er compete with rosy nipple!"


(With thanks to Tess at Magpie Tales for the picture)
Posted by Frances Garrood at 15:12 50 comments: