...or rather, mine. So far this morning I have done the following (rather than write):

Not so necessary:
Have coffee
Buy daffodils
Phone a friend (she was out 🙁)
Chat to husband

Unnecessary:
Arrange daffodils (above) in a time consuming way
Remove ALL the fluff from the tumble drier filter with a small knife
Check emails 15 times
Chat to husband again
Write this

I have succeeded in doing no writing at all. I'd call that successful displacement 😀

No flowers by request...

...look like this, and I think it's terribly sad. People speak of "wasted money", but buying beautiful flowers for a funeral are the last thing friends and family can do for the dead person. In a way, many of us need to do just that; to express our feelings in this way. I'm all for charitable donations, but they can be given in addition - why not? At my late husband's funeral, we had mountains of flowers, and they meant so much. At my mother's, we had lots of sprays and bouquets, and everyone took some home.

So, at my funeral - lots of flowers, please (no wreaths. if you don't mind), and please take some home when you go.

(I was put in mind of this while attending a funeral last week. The coffin was a woven  one, with lots of flowers interwoven along the edge, and a huge bouquet on top. I'd like to go to my Maker in a basket, too. It was beautiful, and much less bleak than a coffin.)
Posted by Frances Garrood at 15:52 18 comments:

A subtle platform for bullying...

...is the art of choosing teams. This was alive and well when I was a kid, and needless to say, I was always picked last. And I haven't forgotten it.*

But it still happens. In an age when the PC brigade have declared that there must be  "no winners or losers" on sports days, picking teams still goes on in games and PE lessons. A child I know, who is being bullied and left off party invitations (that's another thing. What kind of parent allows his child to invite all the children in the class to a party, except one?), and  who is actually good at games, is always last to be picked for a team. And he minds, very much.  Why can't teachers just divide the class themselves, rather than leaving it to the children to decide? Of course  the least popular will be left until last. It's a no-brainer, isn't it?

It's hard to police bullying, for kids are subtle and clever, and a lot goes on out of sight. But surely, in a class situation, where there is an adult in charge, teams at least can be left to that adult, and not to the kids themselves.

*I was actually appalling at games. My instinct when confronted with a ball has always been "missile! Duck or run". But that's another story.
Posted by Frances Garrood at 12:16 8 comments:

I have found a lovely last minute gift here. It's never too late to please someone you love 🐱
Posted by Frances Garrood at 17:30 8 comments:

We writers are very bad at promoting ourselves. It's so hard to tell people how wonderful your books are, but that's what you have to do if you want to sell them. This time around, with three of my books being relaunched, and the publicity people working like mad, I feel I have to do my bit. So - some readers on Goodreads have been sent review copies of Dead Ernest, and I've had some lovely reviews, which you cans see here

That's all. And thank you for reading this. I know that the writers among you will understand!
Posted by Frances Garrood at 16:49 20 comments: 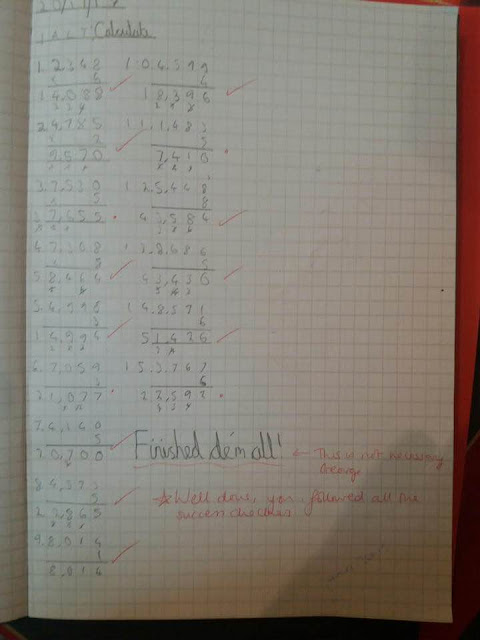 The above is my 10-year-old grandson's recent  maths homework. That boy will go far, (If you can't read the teacher's comment, it is "this is not necessary, George". Hm.)
Posted by Frances Garrood at 22:18 10 comments: