In praise of the those with practical skills 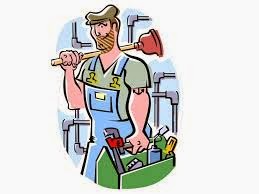 Lord Finchley tried to mend the Electric Light
Himself. It struck him dead: And serve him right!
It is the business of the wealthy* man
To give employment to the artisan.


Hilaire Belloc
This is a verse much quoted by John, who is not handy. Not at all. This is fair enough; not everyone can be handy (I have very handy sons, especially you, B. They inherited this from their father, who could fix/make anything). So whenever anything goes wrong in the house, the great cry goes up: "call a little man"!

We have a lot of these "little men", all lovely people (though not all little), and all of whom have the skills we lack. There is A the plumber (who came this morning to solve the problem of water rising up through the kitchen floor. The jury is currently out on that one). Then there's R, who also came this morning, to fix the grandfather clock (which had had botched abdominal surgery over the holiday, courtesy of six-year-old grandson). L is a brilliant painter (we're talking walls, not Picasso), and scoffs at those who insist on using scaffolding. He perches on a ladder, three floors up, apparently oblivious of the spiked railings waiting like hungry sharks below). S comes to chop down trees (little ones; we only have a courtyard) and do other jobs I can't reach. And then for all other jobs - and some of the above - we have another R, who can do literally anything but is rather difficult to get hold of. In fact, all these people are hard to get hold of, because everyone wants them. If possible, we book early to avoid disappointment (of course, this doesn't  apply to floods).

So I would like to dedicate this rather pointless post to R, R, A, L, S and also the  nice electrician who emigrated to France (please come back!). Where would we be without you?

*In case you wonder, we are not wealthy, so this poem isn't entirely accurate.
Posted by Frances Garrood at 12:37