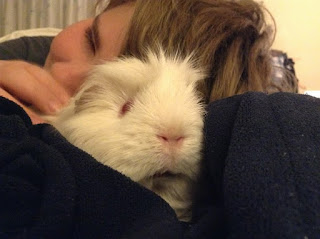 This is one of  my grandsons, with his beloved guinea pig.

Our family has long had a love affair with guinea pigs, who are enchanting (especially the babies, who arrive as ready-made miniatures of their parents. None of that blind, bald nonsense). They are peaceful pets, little trouble and  have an  endearing range of squeaks and whistles. But - they are also subject to panic attacks, they are shy, and they are not very bright. They also don't live very long. Ours in particular didn't live very long, for fate did not smile kindly upon them, although they were much loved. Thus (a random selection):

Two were despatched by next door's dogs, who got into our garden.

One, who had escaped, was borne away, screaming, by the farm cat. The memory hants me still.

Next door's dogs again. The owners were genuinely horrible, and not just becasue they kept guinea- pig-eating dogs.

Perhaps most traumatic of all, on the morning of my father's funeral, we discovered that rats had chewed their way into the cage, eaten the babies, killed one parent and badly maimed the other. A weeping daughter and a trip to the vet on the morning of a funeral is not what we wanted.

Although we had many guinea pigs over the years, I don't recollect a single one dying peacefully in his bed of old age. Oh dear. But those whose bodies we had were given respecful burials in the left-hand flower bed. Theirs weren't the only flower-bed graves, either....

But the good news it that grandson (above) seems to have better luck with his. They live to ripe(ish) old ages, and are beatifully cared for. One of them, the much-loved Josh, used to come into the kitchen to have toast and marmalade and tea (two sugars) for breakfast.