In the governorship of Rick Perry, Texas has executed more than 250 prisoners, many of them  with very low IQs (this contravenes US law). As I think I've said before, Perry is on record (and I've  heard him) as saying that he wouldn't lose sleep if any of these prisoners were later found to have been inoocent. Just as well, as many of the verdicts were dubious. 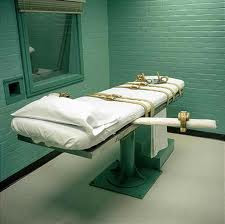 I have no idea when it will be J's turn (my pen friend). But I dread it. I recently sent him a subscription to a magazine he likes. Should I give him a year's subscriptoin or six months? Difficult, when you don't know how long the recipient has to live.

J writes amazing letters. We have been discussing religion, and he says: I have no idea what love or faith are supposed to feel like. Does that lessen me? Since I've never been loved, how would I know what it is?...I have never been loved. I don't feel loss becuse of it. I used to try to, but if you've never had chocolate ice cream, how would you feel loss if you never had it?

I could go on, but enough for now.

Now for the commercial (again)! There are over 200 prisoners on America's many death rows who are on the waiting list for pen friends. If you are interested, do please contact Lifelines to find out more. You won't regret it.
Posted by Frances Garrood at 12:19