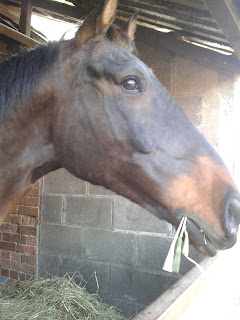 I know, I  know. It's a ridiculous name for a huge horse, but it's short for Mr. Fairfax, which is also a ridic...well, never mind.

He arrived yesterday, and although he has to  be in quarantine for a week  because there are a lot of bugs arorund, he's settled in well. He would like me to point out that although this is his best side, I've missed out the tips of his ears, and he would have preferred not to have his photo taken while he was eating.

He is shy about his parentage, since no-one has any idea who his parents were. So he'd prefer me not to refer to the matter again.

I shall respect his wishes.
Posted by Frances Garrood at 16:03