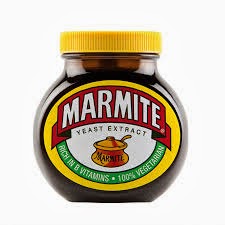 The woman was carrying a heavy bag containing what looked like twenty four jars of Marmite.

"That's a lot of Marmite," someone observed.

"I love Marmite," was the reply. "Arnold couldn't stand it. Said he was allergic."

"All those additives, perhaps?"

She left the bag on the shingle and paddled in the sea. Arnold had hated paddling. She then sat down beside her bag, and ate her picnic of Marmite sandwiches.

Arnold had had Marmite sandwiches for his last meal. She'd told him the sandwiches were cheese. He only managed one bite, though, as it turned out he'd been right about being allergic. By the time the ambulance arrived, it was too late.

Revenge can be savoury, as well as sweet.