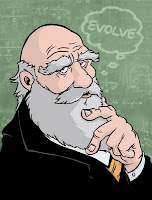 Years ago, my son introduced me to the Darwin Awards, and I'd forgotten about them until recently. For the uninitiated, this is the idea:

"In the spirit of Charles Darwin, the Darwin Awards commemorate individuals who protect our gene pool by making the ultimate sacrifice of their own lives. Darwin Award winners eliminate themselves in an extraordinarily idiotic manner, thereby improving our species' chances of long-term survival."

There are some wonderful examples, but my favourite is the one where a winner was awarded the prize although he managed to survive his experience. He sat down on his garden seat, equipped with a supply of beer and sandwiches, tied lots of helium balloons to the seat, and waited to see what would happen. What happened was that he floated so high above the ground that he was in the flight path of airliners, thus posing a threat to others as well as himself. He was eventually brought down by means of someone shooting the balloons one by one.

Another winner was a man who dived out of a plane in order to photograph skydiver, but perished as he'd overlooked his own need for a parachute. And there was the man who drowned in a washing up bowl of hot water while trying to break into his own house head first through a small window. History doesn't record (a) why he turned the hot water on, (b) why he didn't turn it off or empty the bowl and (c) why he didn't come in through the door (his keys were in his pocket).
Posted by Frances Garrood at 14:20