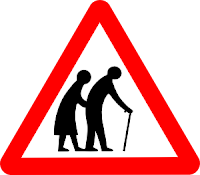 I hate the word "elderly" almost as much as I hate being, well, elderly (I still can't quite believe it. It's one of those things that happen to other people, like marrying Prince Charles or being blown off Ben Nevis). But the icing on the cake has to be this road sign ("Elderly People Crossing", in case you've just landed from planet Zog).

A writer to The Times suggested that it could just as well depict "beware of pick-pockets", and he certainly had a point. But there has to be a better way of portraying older people, hasn't there? I mean, not only is it deeply insulting; it's soooooo sad. And they could at least be standing up straight.

Posted by Frances Garrood at 16:09