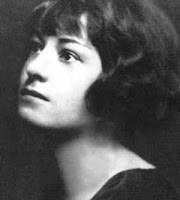 In a comment elsewhere, Aliya asked whether Dorothy Parker always told the truth. I've been thinking about this, and have decided that the answer is almost certainly no. Can someone be a great wit, and also entirely truthful? I think it's unlikely. It's a bit like having a sense of humour but always being charitable. Dorothy Parker was very funny, but rarely kind. An example (a book review):

"This is not a novel to be tossed aside lightly. It should be thrown with great force."

But I admire her, and I envy that sharp, quick wit. She managed to say the things that most people only think of days later, when the moment has passed. However, I'm not sure I would have wanted to have her as a friend.
Posted by Frances Garrood at 19:27