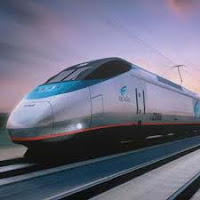 I find the proposal for the new high speed railway link between London and Birmingham quite breathtaking. We are in crisis; school and hospitals are desperate for funds; and if it's trains we're talking about, in our neck of the woods it would be nice even to be guaranteed a seat, never mind a clean carriage and a punctual train. But no matter. Those lucky (relatively) few who want to whizz from London to Birmingham (in less time that it takes to have root canal treatment) may soon be able to do so. In clean new carriages. Sitting down. In comfort.

How large a percentage of the population are actually going to want to take advantage of the link? It connects just two cities. Personally, I shall probably never need to travel (extremely fast, or even slowly) between London and Birmingham. At a time when it's never been easier to work on a train (even our humble, dirty, overcrowded trains have intenet links. If you can get at them), why the hurry? And then there's the destruction of the contryside, too, but since when have we ever cared about that?

As for the billions being spent on just the opening ceremony for the Olympics...

I think I need to go and lie down in a darkened room.
Posted by Frances Garrood at 10:42