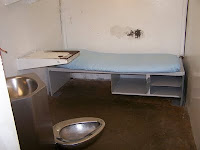 My last death row correspondent, D, no longer wishes to continue writing (perhaps because his sentence has been finally commuted to life imprisonment), and I have been allocated a new prisoner to write to. This man had been on death row in Texas for ten years, and the conditions (especially compared to those of my last correspondent) are appalling. D was at least allowed an X box, and his exercise was taken in the open air. He was also allowed to speak with other prisoners. This is not the case in Texas. The conditions are as follows:

The men are kept in solitary confinement in a small cell, which contains a steel bunk, steel sink and steel toilet. Food is passed through a slot in the door on plastic trays. There is a tiny window shaped like a long letterbox, which is placed high on the outside wall. They have no television and only those with good disciplinary records will be allowed radios. There are no work facilities or study programmes. There is a commissary that sells stamps, stationery, toiletries, food and beverages. The food provided by the authorities is generally poor and those who can afford to will try to supplement their diet as much as possible. The prison is a non-smoking area and it is a disciplinary offence to smoke tobacco. (Of course, recreational drugs are not tolerated.) Prisoners recreate alone in cages big enough to pace around in. They are allowed recreation for one hour three times a week. The visiting is non-contact (behind glass), even for immediate family.

I have only just received this information, and am, quite literally, lost for words.
Posted by Frances Garrood at 15:12